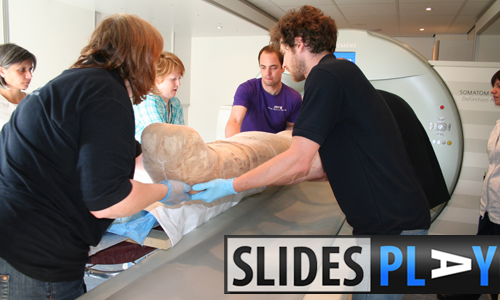 The skull of an ancient Egyptian mummy in Colchester is packed with ‘strange bones’, a CT-scan has revealed. The scan on 2,500-year-old Lady Ta-Hathor yesterday also revealed an odd bundle between her thighs, thought to be the remains of her organs.

Full results from the scan, made ahead of Ta-Hathor’s display at Ipswich Museum’s new Egyptian Gallery, are expected only after an assessment by a team in Manchester. Yet it immediately showed she was healthy with no bone defects, and had died of natural causes aged in her mid-twenties – not far off the era’s life expectancy of 30. Ta-Hathor’s heart had been placed back in her body, a vital step on her journey to the afterlife.

Yet the mysterious bones inside Ta-Hathor’s skull will be of most interest to experts including Caroline McDonald, curator of archaeology at Colchester and Ipswich Museums. “It appears as if the skull cavity has been packed with linen,” says McDonald. “There are some strange bone fragments in the skull that we cant currently account for and we hope experts will be able to reveal this particular secret.”

“There does appear to be a bundle of some description between (Ta-Hathor’s) thighs which may be a parcel containing her other organs such as the lungs and intestines,” adds McDonald. “In early Egyptian history these were placed in separate containers known as canopic jars but later they were simply wrapped and placed back in the body. Again, analysis will confirm this for us.”

Ta-Hathor’s brain was also removed during mummification. All organs would be removed in the process apart from the heart, which would be weighed against the ‘feather of truth’ according to the Book of the Dead. If the heart weighed less than the feather, the deceased could continue their journey. If not they would be eaten by a fearsome crocodile-headed god named Ammut.