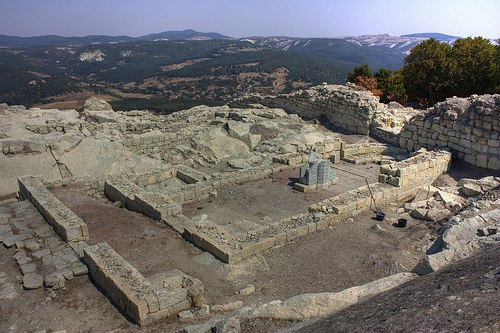 A hat-trick of victories have been won around the world this week in the global fight against the theft and sale of archaeological artefacts a multi-million dollar international industry. The arrest of three men in Bulgaria in connection with their possession of a number of precious Roman coins and other items is particularly heartening, since it offers some sign that the tide might be turning in the struggle against a black-market industry that has been destroying the countrys rich ancient heritage.

In the US on Wednesday, the former head of Long Island Universitys Hillwood Museum Barry Stern, was arrested and charged with the theft of nine items each over 2,000 years old from the museums collection. The artefacts among which are wood, bronze, quartz and limestone models of Egyptian mythical figures had turned up in London fine art auctioneers Christies catalogue in June, ten months after Sterns contract had been terminated. They went on to sell for a total of $51,000. Stern told authorities that the items had been gifts from his parents, but he was later forced to admit his guilt. Hell now be charged with lying to an FBI agent, as well as theft.

Topping Stern for stupidity is James Edward Truhls of Eureka, California, who on Monday pleaded guilty to illegal excavations and the removal of artefacts from a Native American heritage site at Patricks Point State Park, a year on from his arrest. In 2008, several disturbances had been reported at Patricks Point by the Yurok Tribe, who oversee and maintain the land. How did the police go on to catch this cunning criminal? After spotting a video Truhls posted of himself on Youtube, digging at said archaeological hotspot. Hes looking at up to a year in a county jail and a fine of $10,000.

How did the police go on to catch this cunning criminal? After spotting a video Truhls posted of himself on Youtube, digging at the site.

The arrests in Bulgaria were made in the western town of Bobovdol. The three men aged 41, 42, and 52, all with previous criminal convictions were caught carrying 30 bronze Roman coins, dating from between the 1st century BC and 5th century AD, as well as two Roman rings, a spear head and lead melts. They confessed that the items been found near the village of Chukovets; nearby, archeologists from the Regional History Museum in the city of Kyustendil later discovered a religious plaque with Greek inscriptions dedicated to the Thracian god Heros.

Once comprising the bulk of the ancient kingdom of Thrace, Bulgaria is steeped in ancient history, and according to some experts could thrive as a cultural tourism hotspot in the same way as Greece or Italy. But the impoverished former Soviet States government has made scant attempt to build a tourist industry around its heritage sites, and instead allowed a massive illegal industry in the theft and sale of archaeological artefacts to spring up over the last 20 years. A tougher stance on Bulgarias treasure hunters has been promised hopefully these arrests reflect that new approach.