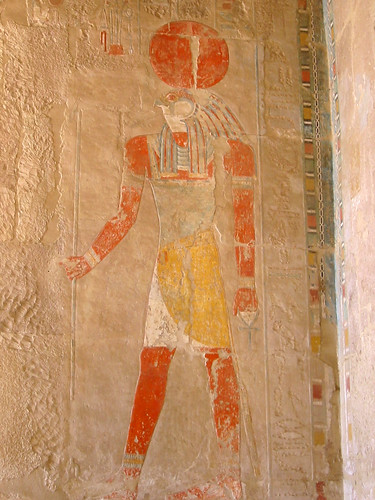 A panel of Japanese experts recently revealed what they considered to be the world’s greatest chat-up line, based upon reams of psychological and sociological research. The result? “This time next year, let’s be laughing together.”

Apparently the sure-fire phrase is based on keywords guaranteed to get the romantic juices flowing. I’m not convinced: it’s hardly Shakespeare, barely even Barbara Cartland.

Still, you might be surprised to learn that the world’s first chat-up wasn’t from a man to a woman, but from man to man. Yes, that’s right folks: the world’s first chat-up line is gay. The Tale of Horus and Seth, an Late Middle Kingdom (1850 – 1700BC) Egyptian papyrus, tells the story of the two gods’ rivalry for Horus’ father Osiris’ throne. After 80 years of arguing, Seth decides to take a rather different route to fool his foe.

“How lovely are your buttocks! And how muscular your thighs…”

Having invited Horus round his house for a feast, Seth performs a sex act on him to have Horus fall out of favour with the courts deciding who will succeed Osiris. In most papyri the act occurs of itself, yet in a version held at London’sPetrie Museum, Seth has to work a little more for his conquest:”How lovely are your buttocks! And how muscular your thighs,” he mentions cheekily.

I’m sure most of us have heard plenty worse, proving that the evolution of the chat-up line really hasn’t come that far in almost 4,000 years. The Tale of Horus and Seth features at the Petrie Museum’sLGBT (Lesbian, Gay, Bisexual, Transgender) Trail, part of UCL’s LGBT month this February, which has included talks by revered historians like Andrew Lear, who spoke recently on Greek pederasty.

If you want to see more of love and sex in the ancient world, then check out our special Ancient World in London video below, where we encounter steamy tales at Roman Baths and the alien world of pederasty.

(Click here to read a transcript of this video)

You can participate in Ancient World in London through our contests – if you’re in London, then check out Spot Ancient London, otherwise you can join in the fun with our virtual quest or the blogger’s challenge. Take a look through our soon – with your help – to be complete directory of The Ancient World in London and suggest any that we may have missed. Just as well, do not hesitate to contact us if you have any suggestions for our webseries! Keep up-to-date with everything in the Ancient World in London by subscribing to our RSS feeds, or by following us onTwitter,YouTube,Facebook,FlickrandiTunes.Heritage Key – Unlock the Wonders.

Check in to our AWiL video page to see all of our latest videos. Unlock the Wonders with Heritage Key.