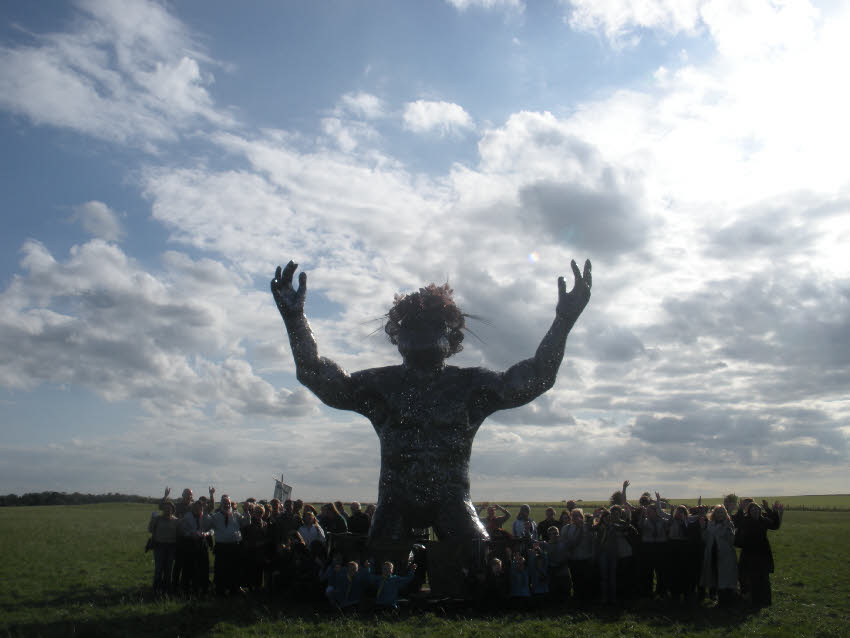 Stonehenge summer solstice 2010 is to be marked by the debut of a 25ft-high steel statue. ‘The Ancestor’, created by local sculptors Andrew Rowlings and Michelle Topps with help from Druids and the local community, will sit 70m from the stone circle and provide an alternative focus of revelry and worship at sunrise, easing congestion within Stonehenge itself.

The Ancestor is as tall as a double-decker bus, and weights a huge seven tons. It has been shrouded in secrecy until today to prevent a further swell of people visiting the already overcrowded event in Wiltshire, which tonight is thought to top the 40,000 mark. Local schools, as well as Cub Scout and Brownie groups have been hard at work on the project, which supposedly represents the spirituality of the ancient people who created Stonehenge with nothing but primitive tools (watch a video about how we’ve had Stonehenge wrong for centuries here).

“We hope that all those at summer solstice will be inspired by the ancestor.”

The result is spectacular. The Ancestor kneels prostrate, his arms outstretched and wearing a Celtic crown. His Easter Island gaze looks upwards at the sun, as thousands will do in approximately five hours’ time (here are some people to look out for at the event). “(The Ancestor) might stand to remind us all that we owe much to our ancestors and might try to be more like them in appreciation of the natural beauty around us,” says Stonehenge Druid Frank Somers.

The statue will be seen as a massive coup for Stonehenge’s pagan community, who have traditionally struggled to have their voices heard over a number of issues – not least the reburial of ‘Charlie’, an ancient child found at nearby Avebury.

“We hope that all those who gather at Stonehenge for summer solstice this year will be inspired by the ancestor,” adds Somers, “and that the ancestors themselves would approve of the way we are honouring them.”

You can see pictures, tweets and trading cards (yes, really!) from Stonehenge live by checking out Ann’s blog, where there’ll no doubt be pictures of the Ancestor as he takes his Stonehenge bow. If you are at the stones now you may want to take a look at this handy guide to get you through the night.

You can also check out this list of alternative places to see in the midsummer sun. Don’t forget that you can also catch the summer solstice at Stonehenge Virtual.