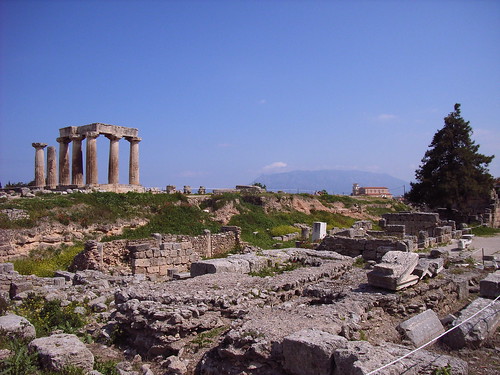 Police have seized two ‘outstanding’ ancient Greek statues in the Peloponnese, shortly before they were due to be sold for 10 million (8.6m). Two men aged 42 and 48 were arrested while loading the pair of 2,500-year-old relics onto the back of a truck near the ancient city of Corinth. Police are seeking a third man they believe to be the group’s ringleader.

The pair of marble statues stand 5’8″ and 5’9″ tall, and are of the Kouros style popular during the 6th and 7th centuries BC. Experts believe both were made by the same sculptor between 550 and 520 BC, and excavated from a temple or cemetery only months ago. Culture minister Pavlos Geroulanos is relieved the statues could be saved before their imminent disappearance. “This is a very important find, of fabulous value, and (both statues) were ready to be taken out of Greece,” he tells AP.

“This is a very important find, of fabulous value.”

The statues, whose legs have been badly damaged by shoddy digging, have been whisked away to Athens’ National Archaeological Museum on temporary display. The precise spot from which they were taken is still unknown, yet some experts think it could be the lost city of Tenea, which served as a POW camp during the Trojan War. Recovering looted ancient treasures is a top priority for Greece’s police, who have to combat dozens of cases per year. “Going after antiquities thieves is our main priority,” adds Geroulanos. “Work has been done in that direction…and we are starting to see the first major results.”

The looting of antiquites is a major worldwide issue. Headline-grabbing incidents have recently hit Bulgaria, Israel and the US, and the issues facing the national museums of Iraq and Afghanistan have been a continued threat to Mesopotamian history.