King Tut Inc – Treasures Worth More Outside of Egypt 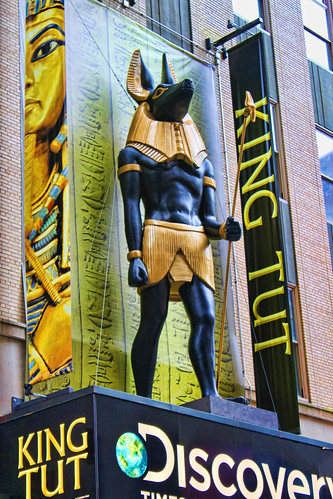 According to figures quoted at an archaeological conference last week by Dr Zahi Hawass, the Egyptian Supreme Council of Antiquities (SCA) has generated more revenue in recent years from sending treasures of Tutankhamun abroad than it has from collections in the countrys own museums. That includes the Howard Carter collection at the Egyptian Museum in Cairo, which features key pieces from King Tuts tomb such as the Golden Death Mask (some amazing picture of which you can view here) and coffins deemed too fragile or unwieldy to travel outwith the country.

The SCA has made over $100 million from its pair of official touring exhibitions of King Tut which have criss-crossed North America since 2005. Tutankhamun and the Golden Age of the Pharaohs has visited Dallas and San Francisco on its travels and is currently in the middle of a long run at the Discovery Times Square Exposition in New York (even though Hawass insists it deserved the Met), while Tutankhamun the Golden King and the Great Pharaohs has been to Atlanta, Indianapolis and Ontario and is at present resident at Denver Art Museum.

At the conference Egypt between past, present and future, organised by the Al-Samra Institution for Environment and Development, SCA secretary general Hawass quoted the total revenue taken in the same period by the SCA both from museums inside the country and antiquities traveling abroad as being one billion Egyptian pounds about $176 million. That means the income from other touring exhibitions and Egyptian museums combined was worth just over $76 million a huge sum, but still $24 million less than the amount made by Tut on his travels.

It underscores the overwhelming success of Dr Hawass and the SCAs policy of using touring exhibitions to bankroll their activities back in Egypt.

Yet, doesnt the increasingly dramatic skew towards externally generated revenue also suggest that the SCAs business activities abroad are beginning to eclipse their responsibilities closer to home even though recent industry analysis shows that tourism in Egypt is bucking global trends and growing at a dramatic rate? Has Dr Hawass turned the SCA into a purely profited-driven operation, which has lost sight of its obligation to ensure its treasures are accessible to the largest possible number of people, both in Egypt and around the world, and not just the highest bidder?

Shouldnt the SCA focus on amassing all of their treasures at home, and bringing as many of these new tourists as possible into Egypts museums?

Hawass makes no bones of his desire to wring every available penny out of Brand Tut and Egypt Inc. In reference to the boy kings earliest foreign adventures the famous exhibitions in Britain and America in the 1970s, which the Egyptian authorities had to fund out of their own pocket the SCA supremo earlier this year told Businessweek: If I had managed the old exhibits, Egypt would be rolling in money.

Certainly, profits have skyrocketed since Hawass took charge of the SCA in 2002, and continue to rise. In a five year period between 2003 and 2008, the SCA earned almost $350 million from a total of 23 different exhibitions sent abroad around $70 million a year. With Tuts profit-margin ever increasing, that figure could double over the next five years.

The fee levied for each King Tut exhibition is a whopping $10 million for six months, with several million dollars more being earned by the SCA in sponsorship and merchandising (the SCA retains exclusive rights to sell replicas of its artefacts, for example).

The result has been the creation, in effect, of a hierarchy of King Tut haves and have nots. The Australian Museum in Sydney recently complained that they nor any other Australian institution for that matter could not afford such price tag, despite Hawass professing to being eager to see Tut travel down under. It explains why Tut hardly has a wide variety of stamps on his passport. Greater Los Angeles has almost 20 million people within 1.5 hours drive of the Los Angeles County Museum of Art where Tutankhamun and the Golden Age of the Pharaohs debuted in 2005. Thats nearly as much as as Australias entire population combined.

But for a spell at the O2 Arena in London between November 2007 and August 2008, and at the Museum of Ethnology in Vienna from March and September 2008, the King Tut travelling collection has spent almost all of its time in North America since 2005. Predominantly its been in the USA. The worlds largest economy has established something of a monopoly over the Tutankhamun roadshow.

Should Egypt be Sending its Treasures Abroad at All? 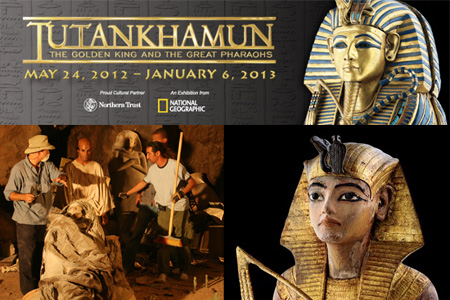 Many voices argue that the SCA shouldnt be sending its treasures abroad at all, complaining that it puts irreplaceable antiquities at unnecessary risk of damage, loss or theft.

The SCA counter by insisting that the strictest standards of care and security are always met, and that all artefacts are insured to the hilt. The money raised from commercial activities in foreign countries, they say, is essential to fund the care of monuments and museums in Egypt, which are massively expensive. The Grand Egyptian Museum in Giza, currently under construction and due to open in 2012 or 2013, is the main project currently being largely funded with King Tuts earnings abroad. Its price-tag currently stands at an estimated $550 million.

Further, the SCA argue that Tut tours act as important ambassadors for Egypt, sparking interest in the country and its wealth of ancient heritage, giving the tourist industry which generates around 11% of GDP extra impetus. The host countries too stand to reap considerable returns from the exhibitions.

Theres no denying that the Egyptian tourist industry is rude health at present figures released this week show tourism revenues defied global trends and reached $5.58 billion in the first half of 2010, compared to $4.6 billion in the same period last year. Industry analysts predict revenues to reach $12.4 billion by the end of the fiscal year, up on $10.8 billion in 2009.

Yet, shouldnt the fact that the profits from Tut on tour are now so outstripping revenue from Egypts museum suggest to the SCA that their focus should be on amassing all of their treasures at home, and bringing as many of these new tourists as possible who include holidaymakers driven out of the eurozone by high prices, and increasing numbers of Russian visitors into Egypts museums?

Hawass has insisted on several occasions in the past that once the two King Tut exhibitions currently running in the US come to an end in 2011, the boy kings treasures will never leave Egypt again. But the SCA chief has since contradicted himself by announcing that Tutankhamun: The Golden King and the Great Pharaohs will appear in Seattle between May 2012 and January 2013. He also hasn’t given up hope on Tut visiting Australia. I want to see King Tut go to Australia, he told the Sydney Morning Herald last December. Nothing like this has ever been to Australia before, and it will be many, many years before the opportunity will come again.

The debate over touring exhibitions raises questions about the real motivation behind Hawass and the SCAs zeal for artefact repatriation. The Rosetta Stone, the Bust of Nefertiti and the Dendera Zodiac are among a list of Egyptian antiquities in the possession of foreign museums that Hawass has firmly in his sights he wants them back, and has vowed to make life miserable for anyone who keeps them. He often offers a moral argument for why the artefacts should be repatriated theyre Egyptian treasures, taken under colonial-era conditions, and they should be returned to their country of origin.

Yet, doesnt the fact that so many of Tuts treasures have been abroad for over five years now suggest that Hawass has no moral qualms about precious Egyptian treasures residing abroad for long periods of time, as long as its the SCA and Egypt that are profiting from them? If the Egyptians were successful in getting the Rosetta Stone or Bust of Nefertiti back, are we to believe that they would really keep them in Egyptian museums on a permanent basis when they could clearly reap spectacular profits from sending them out on loan to the US?

When the Grand Egyptian Museum is completed, and Egypt has a brand new focal point for its collections not to mention all the exhibition space necessary for displaying them can we expect to see the full panoply of Tutankhamun treasures and all other key pieces from the land of the pharaohs currently in the SCAs possession assembled permanently in one place? Judging by the huge figures quoted by Hawass, that seems unlikely.

If you can’t wait for the treasures of Tutankhamun to be prized away from America’s greedy grasp, you can check them out now, for free, in Heritage Key’s King Tut Virtual!