ArchaeoVideo: Prehistoric Paintings, The Swimmers and The Beast in Gilf Kebir

Its hard to imagine that anyone could have once lived on the Gilf Kebir, an arid, remote, desolate sandstone plateau the size of Switzerland, located in the far southwest of Egypt. Yet, as we discover in an exclusive new Heritage Key video report by Nico Piazza, around 10,000 years ago water, and with it vegetation and animal and human life, once ran through the barren land Egyptians today call the Great Barrier.

This long-forgotten prehistoric civilization that once called Gilf Kebir home left their mark in the form of cave paintings and other forms of rock art, in locations such as the spectacular Cave of Swimmers. Located in the 1930s by Hungarian Count and explorer Lszl Almsy (who was later fictionalised as the core character in Michael Ondaatjes book The English Patient, which was adapted into a multi-Academy Award-winning movie) it features images of scores of tiny people swimming elegantly across the walls.

The big question everyones asking is: what the heck are these animals?

Even they pale in comparison to the scenes depicted in the Foggini-Mestekawi Cave, however, discovered much more recently in 2003 by members of a party led by desert tours company Zarzora Expeditions. It bears silhouettes of dozens of hands (not dissimilar to Cueva de la Manos in Argentina) as well as representations of hunting, fishing, games, parents holding their childrens hands even, in some cases, what looks a bit like people taking dancing lessons.

Animals feature heavily too gazelles, giraffes, dogs and lions. Most strange and fascinating of all is the beast a weird, headless creature, with a body like a bull or elephant and the legs of a man. It features frequently, and often appears to be feasting on humans. The big question everyones asking, ponders tour guide Mahmoud Nour El Din in the video, is: what the heck are these animals?

(What’s said in this short docu? If in doubt, check out the video’s transcription here,
or press the arrow in the right below corner of the player, chose ‘CC’ – close captions – and turn the subtitles on!)

They were probably imagined by the prehistoric Egyptian artists, and somehow represent their understanding of the transition from life to death. Hybrid creatures such as the god of the desert and chaos Set were a common element in the belief system of later Egyptian civilizations, many of whom worshipped animal cults. As Foggini-Mestekawi Cave proves, the germ of the idea of the afterlife and mans ability to communicate with it clearly began to gestate very early in the minds of Egyptians, in a long-forgotten corner of the cradle of civilization. 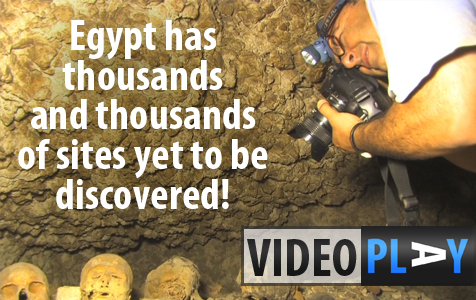 Then make sure to watch this video, where Sandro Vannini and Nico Piazza take you on a journey exploring the Lost Tombs of the Theban necropolis.

Dr Janice Kamrin and Dr. Zahi Hawass supply us with more information on the over 800 tombs that can be found in the necropolis.

Each one of them is unique and offers us a glimpse into what life on earth must have been like in the Egypt of the Pharaohs.