The Mausoleum of Qin Shi Huang – The Comic

The First Emperor lived quite a ‘full’ life: becoming King at age 13, uniting China, constructing the Great Wall and the Terracotta Warriors, finding a cure for Death, avoiding being assasinated, waging a few wars, executing people, …and so forth.

So congratulations to Ian D.Piirtola, who succeeded at capturing all this ANDthe discovery and excavations of the Qin Shi Huang‘s tomb in a 8 pages short – but quite hilarious – comic.

His teachers did not seem to appreciate it that much – he got a C – but we definitely enjoyed it! Thank you for sharing this on Flickr, Mr.Ian D.Piirtola! 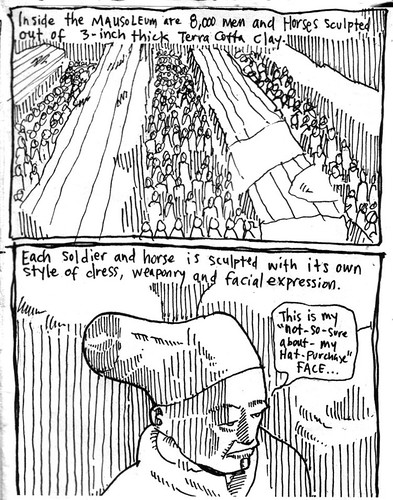 Don’t you just love the young Emperor’s ‘Dudes!!’ and fascination with dragon candy?The best thing though, is that thanks to this comic, I actually learned something new.Idid not know the land was shaped to look like a dragon – according to Chinese geometry, nor that The Emperor’s tomb is actually ‘the eye of the dragon’.Guess Ishould have read this…. *blush*

Maybe – if the new excavations at Xi’an produce new finds – we can get a sequel to this little comic?*hopes*