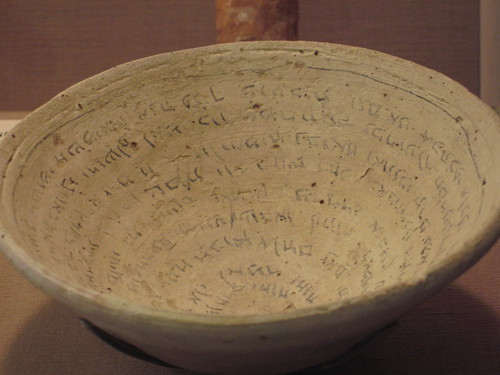 An archaeological mystery may have come to an end, after an enquiry into the origin of 654 Aramaic incantation bowls from the Schyen Collection was finally made public. The report – recently placed in the House of Lords Library – states that bowls currently finding themselves in Britain were likely to have illegally been looted after the Gulf War and should be returned to Iraq.

Commissioned by the University College in London in 2005, the results of the enquiry are that the bowls were stolen from the historical site of Babylon some time after the 1991 Gulf war, and that their provenance is not Jordan, as believed by Norwegian multimillionaire collector Martin Schyen. They should therefore be returned to Iraq or handed over to police. “The bowls are subject to the Iraq United Nations sanctions order 2003,” says the report, “as cultural objects illicitly removed from Iraq after 6 August 1990 and that UCL has therefore a duty to deliver them to a constable.”

The report was finished in 2006, but its findings were suppressed under a legel settlement made between the UCL and the collector when Schyen started legal proceedings over not getting his bowls back. This settlement also led to the payment of an undisclosed compensation sum to the collector. At that time a joint press release was issued by both parties, stating that: “following a searching investigation by an eminent panel of experts, and further inquiries of its own, UCL is pleased to announce that no claims adverse to the Schyen Collections right and title have been made or intimated.”

This statement is quite different from the report which concluded that although Schyen might not have been aware that the bowls were looted when they were purchased, he was guilty of not showing enough interest into their provenance.

A second statement by the Schyen Collection repeated the claim that the bowls were exported from Jordan prior to 1988 and that they were most likely ‘surface finds’. The statement claimed the bowls were part of a private collection built up in Jordan in the 1930s, and that the collection had been granted a valid export license (questions on the validity of this license can be found on the stanford.edu website) by the Jordanian authorities in 1988.

The collection’s website for provenance of the ‘Rihani Collection’ still reads: “Rihani collection, Irbid and Amman, Jordan (before 196588) and London (1988).”

The 5th to 8th century incantation bowls – borrowed from Schyen in 1996 by an UCL Professor Mark Geller – are still in the United Kingdom. Cambridge academic Lord Renfrew of Kaimsthorn, one of the authors of the report, now calls for the Iraqi goverment to demand the return of the bowls and if need be even persue the repatriation of the looted artefacts in court.

The report is now also available on wikileaks: “The file is the report from an expert inquiry into the provenance of 654 Mesopotamian incantation bowls owned by antiquities collector Martin Schoyen and loaned to University College London. The inquiry was begun after allegations were made that the bowls were were looted from Iraq. The report was suppressed as part of the legal settlement in which the bowls were returned to Schoyen.“

This is not the first time the Schyen Collection – which may be the world’s largest collection of ancient manuscripts – has been questioned over the origin of its objects. Shortly after in 2001 Martin Schyen announced he wanted to sell the entire collection for 100 million USD, questions were raised about Buddhist manuscripts smuggled out of Afghanistan that Schyen eventually aquired and the Egyptian ambassador to Norway called for an inquiry into how Schyen came by his Egyptian objects.