Digital Reconstruction of the Antikythera Mechanism 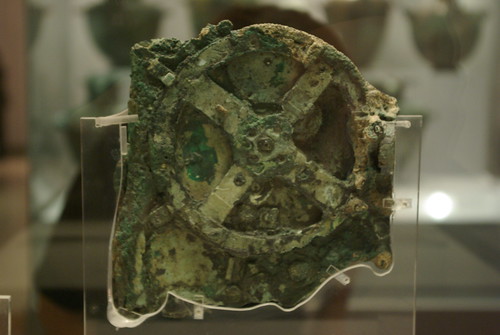 The Antikythera Mechanism is one of the most debated – execpt perhaps the Elgin Marbles – Greek artefacts. Where the frieze of the Parthenon leaves us with mainly one single question, ‘Who does it belong to?’, this no-doubt ingenious ancient device raises a myriad questions like, ‘When and by whom was it created?’; What purpose did it serve?’; ‘How did it look in its entirety?’ and, ‘What was it doing on board of the Antikythera Wreck?’ Scholars around the world are working hard to resolve these issues, and every year new answers surface. One thing all the scholars agree on, however, is that the Antikythera Mechanism is the oldest analogue computer discovered (up until now).

(To skip the history and go straight to the virtual reconstruction, click here.) The Roman ship carrying the Antikythera mechanism had sunk off the coast of the Greek island, Antikythera, the wreck and its contents being consistent with a date in the 1st century BC. The famous Jacques Cousteau recovered coins from the wreck, which reinforces a view that this had been a treasure ship from General Sulla on its way to Rome, carrying booty from Pergamon after the First Mithridatic War. It has been speculated that the ship foundered because of its age – its wood is dated to the 2th century BC – and perhaps because it was overloaded with treasures including a number of particularly large statues. Those statues are now on display in the National Archaeological Museum in Athens, alongside the Antikythera Mechanism.

How long does it take to make such a machine? “Exactly the same time as giving birth to a child, my wife says with a laugh,” says Mr Vicentini

The Antikythera Mechanism is widely considered to be one of the most important archaeological artefacts ever found. When it was discovered in 1902 by archaeologist Valerios Stais, it was thought to be one of the first mechanised clocks. We now know it is an ancient mechanical calculator designed to model astronomical phenomenon with remarkable detail. It appears to be constructed upon theories of astronomy and mathematics developed by Greek astronomers, and it is thought to have been made between 150 and 100 BC.

Most likely we’ll never know for sure who envisioned this ancient computer made out of – for the time precious – bronze, but most likely it was created on the island of Rhodes by someone of the Hipparchus School. The mechanism contains a lunar apparatus which uses astronomer Hipparchus’ theory of the motion of the Moon; and Rhodes was one of the major academic centres at the time in Europe.

When a date was entered via a crank, the Antikythera Mechanism would reveal to its owner the position of the Sun, Moon, or other astronomical information such as the location of other planets. There is reference in the inscriptions for the planets Mars and Venus, and it would have certainly been within the capabilities of the maker of this mechanism to include gearing to show their positions. There is some speculation that the mechanism may have had indicators for all the five planets known to the Greeks – yet none of this gearing for such planetary mechanisms survives, save for one which is otherwise unaccounted for. The front dial includes a precursor to the modern day Almanac, which was used to mark the rising and setting of specific stars. Each star is thought to be identified by Greek characters which cross-reference details inscribed on the mechanism. The ancient astronomical calculator used the 365-day Egyptian calendar – the Sothic year – and could be adjusted to compensate for the effect of the extra quarter-day in the solar year.

In the past few years more than a Terrabyte of data – 1000 gigabytes or 200 DVDs – has been collected and processed by the Antikythera Mechanism Research Project. This data contains digital photographs, surface images or Polynomial Texture Mapping images (PTMs) and 2D and 3D X-ray scans, some of which are available online. The imaging system enabled much more of the Greek inscription to be viewed and translated, from about 1,000 characters that were visible previously to over 2,160 characters – representing about 95% of the extant text.

The Antikythera Mechanism Research Project detected in July 2008 the word “Olympia” on a bronze dial thought to display the 76 year Callippic cycle, as well as the names of other games in ancient Greece. Jo Marchant at the New Scientist expands on this:

One new clue I mentioned to the origin of the mechanism comes from the Olympiad dial – there are six sets of games named on the dial, five of which have been deciphered so far. Four of them, including the Olympics, were major games known across the Greek world. But the fifth, Naa, was much smaller, and would only have been of local interest. The Naa games were held in Dodona in northwestern Greece, so Alexander Jones of the Institute for the Study of the Ancient World in New York has suggested that the mechanism must have been made by or for someone from that area.

Intriguingly, this could mean the device is even older than thought. The inscriptions have been dated to around 100 BC, but according to Jones the device may have been made at latest in the early second century BC, because after that the Romans devastated or took over the Greek colonies in the region, so it’s unlikely that people would still have been using the Greek calendar there.

It has taken some of the highest-tech imagery, and a highly multi-disciplinary team to finally piece together much of the Mechanisms function. However the research is far from complete, and there is a general consensus that the Mechanism hasnt relinquished all of it secrets just yet.

Physical and digital models of the Antikythera Mechanism

There are quite a few young and old replicas of the Antikythera Mechanism; the oldest one by Robert Deroski; one by Michael Wright, who has built a fully-working model of the Mechanism using traditional methods; and a model by Mogi Massimo Vicentini.

How long does it take to create such a reconstruction? Mr Vicentini claims that by working mostly during his spare time it took him about nine months, from conceivement to presentation of the physical model: “Exactly the same as giving birth to a child, my wife says with a laugh,” he jokes. And where to visit this replica? If not requested for presentations or temporary exhibitions, it stays safely at Mr. Vicentini’s home, but at his website you can have a glimpse through some photographs.

Virtual Reconstruction of the Antikythera Mechanism

Mogi Vicentini recently created a splendid virtual model of the Antikythera Mechanism, based on the theoretical and mechanical model of Michael Wright. He kindly gave permission to include it in this blogpost, and I suggest you definitely watch it, as it helps to understand this ingenious mechanism:

For a larger version of this video, more virtual renders and VRML files of the Antikythera Mechanism, visit Mr. Vicentini’s website at www.mogi-vice.com.

But it’s perhaps the 3Drender by Mogi Massimo Vicentini, that he worked on with Michael Wright, of a virtual model of the complete machine that speaks most to the imagination. And in more than one way! “While working on the model of Antikythera , I noticed that 3DStudio Max began behaving oddly, crashing more and more frequently,” he says. “This has been my most complex virtual model so far – maybe I’ve pushed the software to its limits… or this might just be the effect of some Antikythera “black magic”, as experienced by many other peoples involved in it.” Luckily Mr Vicentini was able to compile and send the finished video the night before the technical opening of the exhibition at the Museo di Storia della Scienza di Firenze.

I asked Mr Vicentini if there are any ‘Pyramidiot’ level theories about the device, as the Antikythere Mechanism website does mention frequently asked questions like, ‘Is its existence evidence of time travel?’ and ‘Was it left by aliens?’ Until this day, Mr Vicentini has not found any really bad interpretations of the Antikythera Mechanism, “But I must add, as personal choice we have no TV set at home, so I might have missed something odd!” He reckons this might be because it’s just too difficult an object for easy speculation, and that it has been thorougly examined by the most serious scholars. It is true, even incomplete, that the inscriptions leave no reasonable doubt as to the mechanism’s general purpose.

When Mogi Vicentini started his research on the Antikythera Computer, not many resources were available – let alone online: “I was going for a Price model in 2006, as I suddenly discovered the new finds by the Antikythera Research Group, and I had to redesign most of the layout,” he sighs. “After completing my mechanism, I learned that Mr. Wright had actually built a working model including planets and eventually we got in contact via a common friend, Mr. Fabio Soso of Geneve. He saw my work, presented us to each other, and suggested our cooperation for a virtual model of the complete machine. Before then, I relied on some sparse notes published as thesis or on magazines like ‘Scientific American’ and ‘Nature’, but now I would warmly suggest Marchants’ book as a good and well-balanced source for an overall view of the story.”

For further learning and browsing on this interesing topic, there is Mr Vicentini’s website – mogi-vice.com – containing lots of images of both the physical and the digital models, as well as diffent VRML schematic models of the Antikythera Machine, based on Price, Bromley and the Antikythera Mechanism Research Project Group. For updates on recent research you best keep an eye on antikythera-mechanism.gr.