All aboard! Ancient Egyptian Ship Sails for the Legendary Land of Punt 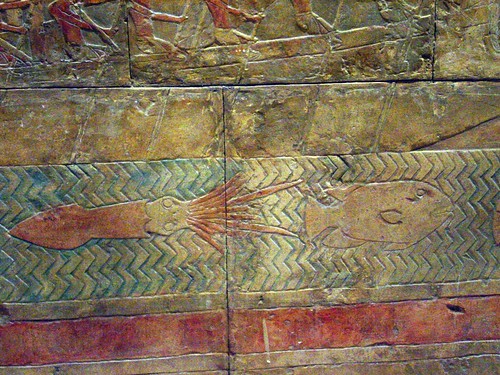 Ancient Egyptians may be best known for building pyramids, but internationally renowned maritime archaeologist Cheryl Ward wants the world to know that they were pretty good sailors, too. Ward and an international team of archaeologists, shipwrights and sailors recently built a full-scale replica of a 3,800-year-old ship and sailed it on the Red Sea to re-create the voyage Egyptian female pharaoh Hatshepsut took to a place the ancient Egyptians called God’s Land, or Punt.

A 2006 discovery of the oldest remains of seafaring ships in the world in manmade caves at Wadi Gawasis, on the edge of the Egyptian desert was at the start of this modern-day adventure. The Egyptians used this site to assemble and disassemble ships built of cedar planks and to store the planks, stone anchors and coils of rope until the next expedition – one that obviously never came. The wooden planks found in the caves were determined nearly 4,000 years old. Based on the shipworms that had tunneled into the planks, Cheryl Ward hypothesized that the ships had weathered a long voyage of up to six months, likely to the fabled southern Red Sea trading center of Punt. Civil unrest and political instability after the Middle Kingdom period likely put a halt to further exploration, and the caves were long forgotten.

Scholars had long known that Egyptians travelled to Punt, but they debated its exact location and whether the Egyptians reached Punt by land or by sea. Some had thought the ancient Egyptians did not have the naval technology to travel long distances by sea, but the findings at Wadi Gawasis confirmed that Egyptians sailed a 2,000-mile round trip voyage to Punt, located in what is today Ethiopia or Yemen, Ward said.

By October 2008, the 66-foot-long by 16-foot-wide ship, which Ward dubbed the Min of the Desert, was completed using the techniques of the ancient Egyptians. This means no frames, no nails and planks that were designed to fit together like the pieces of a puzzle. The Ancient Egyptians would have carried the ship piece by piece across the desert, but the ‘Min of the Desert’ was for convenience reasons allowed to travel by truck.

In late December, the Min of the Desert set sail but political limitations as well as an abundance of modern-day pirates along the southern end of the route kept the crew from leaving Egyptian waters, and the voyage ended after seven days and about 150 miles into what would have been a 1,000-mile trip to Punt.

But still, the crew was surprised at how fast the ship was able to travel: it sailed 150 miles in just 7 days at approximately 6 knots. “The ship’s speed means that journeys would be made in much less time than Egyptologists had calculated, making the whole voyage simpler and more feasible for the ancients,” she said, adding that it probably took about a month to sail to Punt and two months to return. “The technology we used had not been applied to shipbuilding for more than 3,500 years, and it still works as well today as it did then.”

“This project has demonstrated the extraordinary capability of the Egyptians at sea,” Ward said. “Many people, including my fellow archaeologists, think of the Egyptians as tied to the Nile River and lacking in the ability to go to sea. For 25 years, my research has been dedicated to showing the scope of their ability and now, to proving their independently invented approach to ship construction worked magnificently at sea.”

The Press Release on the Florida State University website.
Or read Cheryl Ward’s description of this adventure, illustrated with tons of photographs.